What Is State Pattern C#?

State Pattern in C# allow an object to alter its behavior when its internal state changes.

The State pattern, can be seen as a dynamic version of the Strategy pattern. When the state inside an object changes, it can change its behavior by switching to a set of different operations.

This is achieved by an object variable changing its subclass, within a hierarchy.

Below is the UML and sequence diagram of State pattern from Wikipedia.

Let’s us see an example to better understand this concept.

Let’s take a look at an example of Work Item Tracking. Work Item Tracking is simply the bug tracking systems that we have all used such as Team Foundation Server. They all have in common that the work items or bugs go through a transition process. In each step of the transition they change states, and along with the change of state, the behavior of the work item also changes.

Let’s take a look at an implementation of this simple example.

I have here our command line interface of a work item tracking system that is using the basic CMMI approach that TFS uses with four states to the work items. There’s Proposed, Active, Resolved, and Closed. 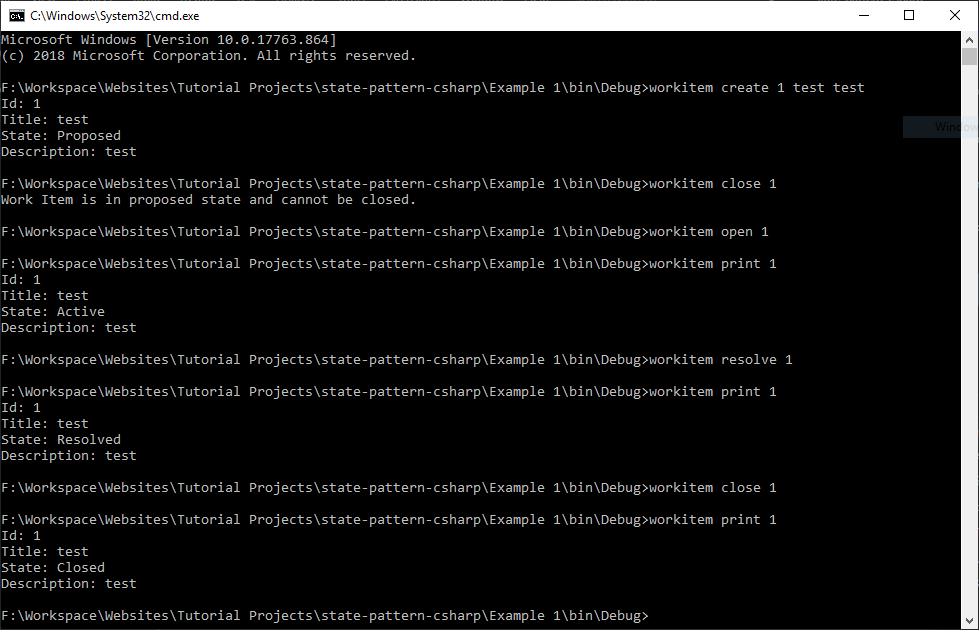 As we can see, there are some issues with the Simple or Naive approach.

State pattern can help us to solve all these issues.

I want to, though, encapsulate that logic of each state into a single object, something that is in one area that I can test by itself.

In the current application in the simple or naive approach, we had all of the states in the code, but the State Pattern can allow for the dynamic discovery of new states and the program should be able to integrate them into the process.

And, of course, with all of this we want to make unit testing easier.

Let’s take a look at the implementation of the State Pattern.

In the Main Program, the structure will be pretty much the same. The program starts by creating a repository, parsing the command lines, and then executing the commands on the WorkItems.

As noted in the code, this does not strictly separate the state from the WorkItems, but you can see here how that functionality can quickly be added so that the WorkItem itself may not know anything about the states in the future.

What you do notice is that apart from the state change, there is no longer any case statements in each method of the WorkItem.

The states themselves have been broken up into a separate class for each state.

If we look at the active state, we see how the Active class is inherited from the BaseState and implements the ICommands interface.

The inheritance from a BaseState is not required, but it shows that we can still leverage commonality in the states as long as they all implement the ICommand’s interface so they can have a relationship back with the WorkItem.

Benefit Of The State Pattern

The benefit of the State Pattern should be obvious by now. One of the immediate benefits is the Separation of Concerns.

Whereas the WorkItem used to contain all of the logic about creation, the data, the state, and all of the method behaviors, it is now dedicated to simply the creation of the WorkItems and the data they contain.

The method behaviors have been abstracted away and are localized to the specific state of the object.

The state objects themselves can be reused. This is where other design patterns such as the Flyweight Pattern can be used so that only a few instantiations of the state objects are created at any time.

Often, the state objects will only have a single representation implemented by the Singleton Pattern and will be reused throughout the application.

All of this provides a way to simplify the program. This allows for a clearer understanding and easier testing, which all leads to greater maintainability.

Where To Apply State Pattern?

The Template Method pattern in C# enables algorithms to defer certain steps to subclasses. The structure of the algorithm does not change, but small well-defined parts of its operation are handled elsewhere.

In this post, you will learn how to send and receive Emails in ASP.NET with C#.