What Is Chain Of Responsibility Pattern?

The Chain of Responsibility is an ordered list of message handlers that know how to do two things; process a specific type of message, or pass the message along to the next message handler in the chain.

The Chain of Responsibility provides a simple mechanism to decouple the sender of a message from the receiver.

In this respect, the order of the receiver list matters. If the first receiver and the second receiver can both handle the same type of message, some sort of message handling priority would have to be built-in to the list.

Below is the UML and sequence diagram of Chain Of Responsibility pattern from Wikipedia.

One of the great examples of the Chain of Responsibility pattern is the ATM Dispense machine. The user enters the amount to be dispensed and the machine checks if the amount is dispensable in terms of defined currency bills such as 50$, 20$, 10$, etc.

We will use the Chain of Responsibility pattern to implement this solution. The chain will process the request in the same order as the below image. 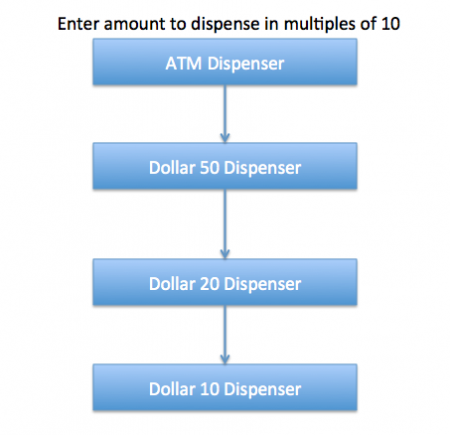 We can implement this solution easily in a single program itself but then the complexity will increase and the solution will be tightly coupled. So we will create a chain of dispense systems to dispense bills of 50$, 20$ and 10$.

Let’s see another example. This time we will start with the problem statement, the Budget Approval problem.

Let say a worker name William has generated an expense report. He would like to have the expenses approved so he can be repaid. He sends the expenses to his manager. The expenses are too large for his manager to directly approve, so she sends it on to the vice president. The vice president is also unable to approve such a large expense and sends it directly to the president. Now the president has the ultimate authority and will review the approval, and give William a response. Let’s take a look at a solution that does not use the Chain of Responsibility Design Pattern.

There’re a few basic interfaces we’ll cover before we begin to get everybody up to speed.

And then we have an ApprovalResponse; Denied, Approved, or Beyond the Approval Limit for that ExpenseApprover.

The ExpenseReport concrete implementation is very straightforward. It simply exposes the Total as a property.

Here we have our main Expense Approval application.

The request was approved or denied. But if they weren’t, we’ll iterate on to the next manager in the list.

Issues in the current implementation:

One of the issues we have is that the caller is responsible for iterating over the list. This means the business logic of how expense reports are promoted through the management chain is captured at the wrong level. If I bring an expense report to my manager, and I ask for approval, if he says that’s beyond my expense limit, he doesn’t tell me to go on and ask his manager, he’ll do that for me. I simply send an expense report, and at some point in the future, I get a response. I don’t need to worry about the promotion process that happened behind the scenes. Our code should reflect that. And with the Chain of Responsibility, we’ll be able to.

Now let’s take a look at the Budget Approval application, using the Chain of Responsibility.

It should be clear just at first glance that this is a significantly smaller amount of code than what we had in the non-Chain of Responsibility solution.

The most obvious difference, to begin with, is the addition of the ExpenseHandler class. This ExpenseHandler represents a single link in the Chain of Responsibility. Let’s go ahead and take a look at that class to understand how it works.

Basically, what its saying is if I can’t approve this expense, I should ask the next link in the chain if it’s able to approve the expense. In the ExpenseHandler class, the concrete implementation of the IExpenseHandler interface, we take an ExpenseApprover in the constructor. This Approver is an employee, just like in the previous example. The Approve method receives an ExpenseReport. We ask the Approver, are you able to approve this expense, just like in the previous example. In this case, if they are not able to Approve the expense, because it’s beyond their approval limit, we go to the next link in the chain, and we ask it to Approve it.

In the above solution, we have used a null object pattern to handle the null reference exception because it gives us a little more freedom in how we want to handle the end of the chain. Every time we create an ExpenseHandler, until we’ve called RegisterNext, next will be null. So instead of letting it be null, we gave it a default value of a null object.

What I’ve done is I’ve created an EndOfChainExpenseHandler class, and this class exposes a singleton Instance. This Instance is the EndOfChainHandler.

The benefits you’ll see when using the Chain of Responsibility include a reduced coupling between the message sender and receiver. You’ll be able to dynamically manage the message handlers, and the end of chain behavior can be defined appropriately depending on your business context.

Chain Of Responsibility Pattern In .NET

.NET exception handling mechanism is a wonderful example where the chain of responsibility pattern is leveraged. We know that we can have multiple catch blocks in a try-catch block code. Here every catch block is kind of a processor to process that particular exception.

In the following example, two catch blocks are used, and the most specific exception, which comes first, is caught.

Chain Of Responsibility Pattern In ASP.NET

Every request in the pipeline passes through a series of modules (a class that implements IHttpModule) before it reaches its target handler (a class that implements IHttpHandler). Once a module in the pipeline has done its duty, it passes the responsibility of the request processing to the next module in the chain. Finally, it reaches the handler.

The following code snippet shows how one can write an object that leverages the chain of responsibility pattern to create a module that filters an incoming request. These filters are configured as chains and will pass the requested content to the next filter in the chain by the ASP.net runtime:

In the ASP.NET pipeline, a request passes through a series of HTTP modules before it hits a handler. A simple HTTP handler routine is given as follows:

We can configure the handler as given next. Whenever we create an ASP.NET resource with the .smp extension, the handler will be SimpleHttpHandler:

Where To Apply Chain Of Responsibility Pattern?

ASP.NET Core and the Enterprise Part 3: Middleware by K. Scott Allen - In this post, Scott explains how ASP.NET Core is different from tradition ASP.NET. In this post, Scott talks about the replacement for modules and handlers, which is middleware. Middleware is usually chained together and it’s up to them to decide whether to invoke the next one in the chain thus creating a Chain Of Responsibility.

Implementing a Chain-of-responsibility or “Pipeline” in C# by Maxime Rouiller - In this post, Maxime explains how by chaining Strategy Pattern, we can increase the amount of flexibility inside our model and increase the reuse of common algorithms.

Chain of Responsibility as catamorphisms by Mark Seemann - In this post, Mark discusses Chain of Responsibility from a different perspective and explains how instead of relying on keywords like if or switch, you can compose the conditional logic from polymorphic objects. This gives you several advantages. One is that you get better separations of concerns, which will tend to make it easier to refactor the code. Another is that it’s possible to change the behavior at run time, by moving the objects around.

In this post, we will discuss different types of comparison methods, such as equality operators, object.equals method and IEquatable interface, used for comparing values in C#.

Code with Shadman
—
Chain Of Responsibility Pattern C#
Share this