.NET (dot-net) is the name Microsoft gives to its general vision of the future of computing, the view being of a world in which many applications run in a distributed manner across the Internet. We can identify a number of different motivations driving this vision.

Firstly, distributed computing is rather like object oriented programming, in that it encourages specialised code to be collected in one place, rather than copied redundantly in lots of places. There are thus potential efficiency gains to be made in moving to the distributed model.

Secondly, by collecting specialised code in one place and opening up a generally accessible interface to it, different types of machines (phones, handhelds, desktops, etc.) can all be supported with the same code. Hence Microsoft’s ‘run-anywhere’ aspiration.

Thirdly, by controlling real-time access to some of the distributed nodes (especially those concerning authentication), companies like Microsoft can control more easily the running of its applications. It moves applications further into the area of ‘services provided’ rather than ‘objects owned’.

Interestingly, in taking on the .NET vision, Microsoft seems to have given up some of its proprietary tendencies (whereby all the technology it touched was warped towards its Windows operating system). Because it sees its future as providing software services in distributed applications, the .NET framework has been written so that applications on other platforms will be able to access these services. For example, .NET has been built upon open standard technologies like XML and SOAP.

At the development end of the .NET vision is the .NET Framework. This contains the Common Language Runtime, the .NET Framework Classes, and higher-level features like ASP.NET (the next generation of Active Server Pages technologies) and WinForms (for developing desktop applications).

The Common Language Runtime (CLR) manages the execution of code compiled for the .NET platform. The CLR has two interesting features. Firstly, its specification has been opened up so that it can be ported to non-Windows platforms. Secondly, any number of different languages can be used to manipulate the .NET framework classes, and the CLR will support them. This has led one commentator to claim that under .NET the language one uses is a ‘lifestyle choice’.

Not all of the supported languages fit entirely neatly into the .NET framework, however (in some cases the fit has been somewhat Procrustean). But the one language that is guaranteed to fit in perfectly is C#. This new language, a successor to C++, has been released in conjunction with the .NET framework, and is likely to be the language of choice for many developers working on .NET applications.

What is Microsoft .Net Framework?

The framework also supports various programming languages such as Visual Basic and C#.

The .NET Framework is designed to fulfill the following objectives:

Parts Of The Common Language Infrastructure

Common Language Specification (CLS) is a set of basic language features that .Net Languages needed to develop Applications and Services , which are compatible with the .Net Framework. When there is a situation to communicate Objects written in different .Net Complaint languages , those objects must expose the features that are common to all the languages . Common Language Specification (CLS) ensures complete interoperability among applications, regardless of the language used to create the application.

The Virtual Execution System (VES) is a run-time system of the Common Language Infrastructure CLI which provides an environment for executing managed code. It provides direct support for a set of built-in data types, defines a hypothetical machine with an associated machine model and state, a set of control flow constructs, and an exception handling model. To a large extent, the purpose of the VES is to provide the support required to execute the Common Intermediate Language CIL instruction set.

The following illustration, taken from Wikipedia, illustrates the CLI and its context. 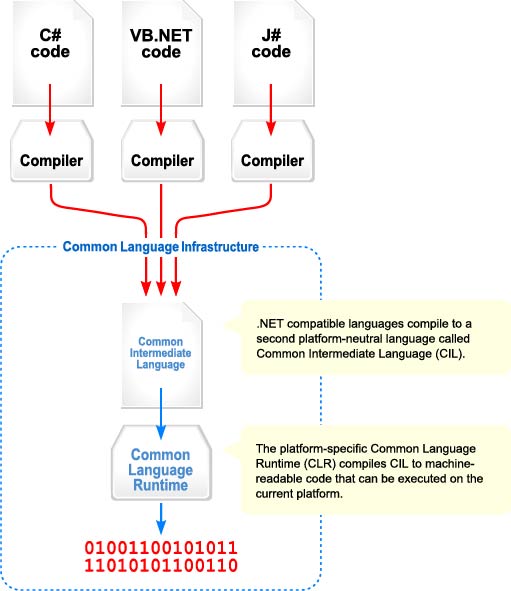 The Common Language Runtime (CLR) includes a JIT compiler for converting MSIL to native code. The JIT Compiler in CLR converts the MSIL code into native machine code that is then executed by the OS. During the runtime of a program the “Just in Time” (JIT) compiler of the Common Language Runtime (CLR) uses the Metadata and converts Microsoft Intermediate Language (MSIL) into native code.

In the next article we run through a standard ‘hello world’ example, with links to lessons covering the different parts of the program.

In this article we run through a standard 'hello world' example, with links to articles covering the different parts of the program.

These are some of the most important and easy ways to keep your work from home experience up to the mark. You can try these tips at home for a better productive work

Code with Shadman
—
Introducing To .NET Framework
Share this