What is Adapter Design Pattern?

The Adapter Pattern is a software design pattern that attempts to reconcile the differences between two otherwise-incompatible interfaces. This pattern is especially useful when attempting to adapt to an interface that cannot be refactored.

When you have a class that needs to utilize a particular interface, and you have a library that includes the functionality you need, but it doesn’t use the interface that you require. You can achieve the reuse of that library’s code by creating an Adapter class. This adapter class sits between your client code, and the code that’s in this library, and adapts one interface to the other. The Adapter design pattern is one of the most common, and most useful patterns available to us as software developers. 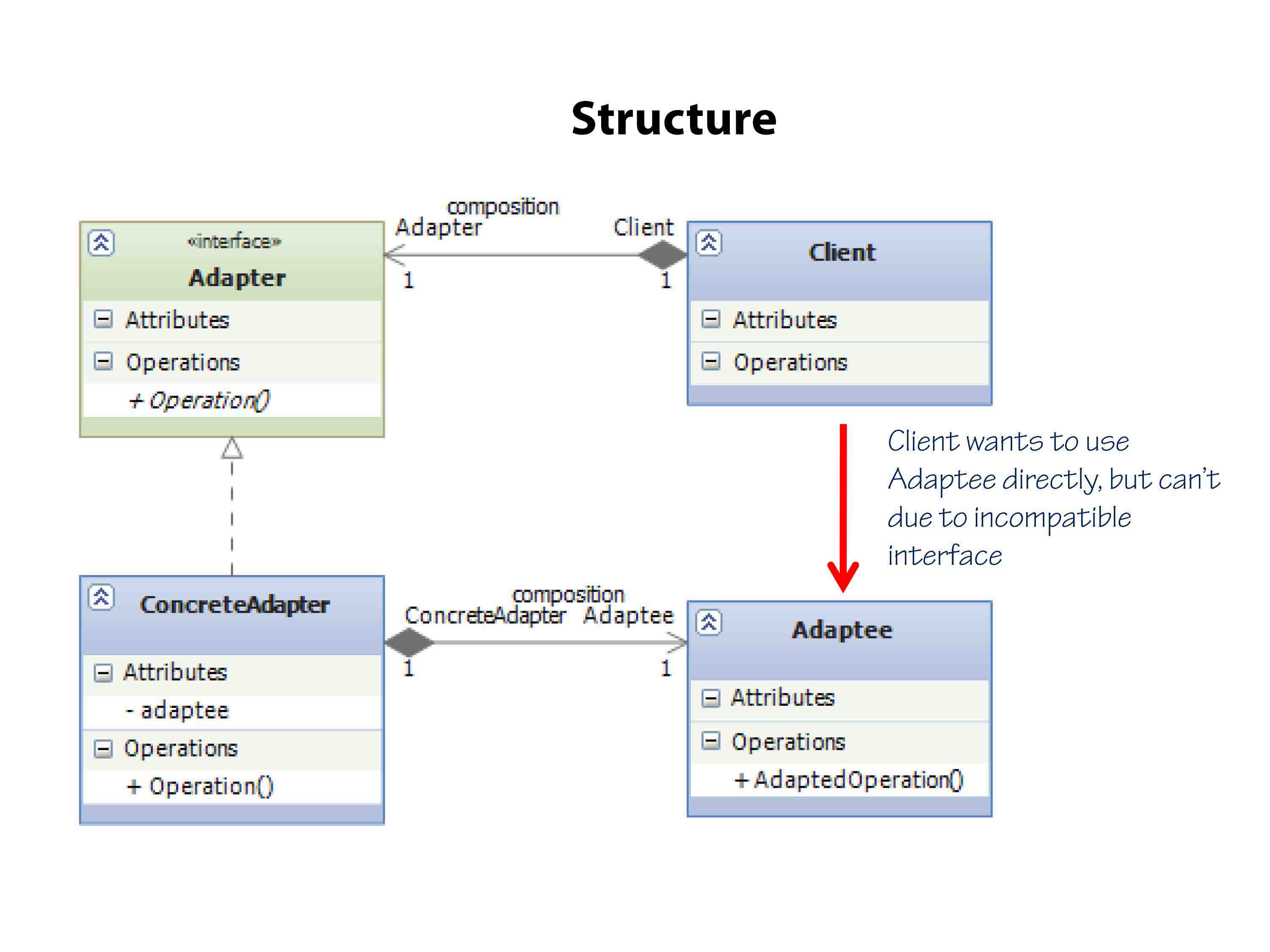 Let’s look at the structure of the Adapter Pattern using this UML diagram. The two basic players within this example are the Client, and the Adaptee, shown above.

The Adapter interface is created, exposing an operation that has the interface the client expects.

The Client really wants to use the Adaptee directly, but unfortunately, it can’t due to the incompatible interface. The Adapter Pattern is simply allowing us to achieve this despite this incompatibility.

Let’s see the implementation of Adapter pattern in C#, with IDbDataAdapter example,

IDbDataAdapter is one of the .Net built-in interfaces under System.Data namespace.

Now, In the below code, I created a DataRenderer class that takes IDbDataAdapter as a parameter and renders data that comes from data adapters in the form of data Tables.

If we want to render the below persons list using the above DataRenderer class, in the same format without tweaking its code.

But, DataRenderer accepts an IDbDataAdapter and thus it is incompatible with persons datatype. However, one thing we can do is that we can create another renderer that accepts the persons list.

We could convert this List<Person> persons into the format that is compatible with DataRenderer class then we don’t have to write the same repeatable code for rendering data. Let’s see how

After creating DbAdapter for our persons list we can render our list using the existing DataRenderer class. Let’s see how

Now from the above code, we can conclude that the List<Person> is an Adaptee, DataRenderer is a Client that depends on IDbDataAdapter our Adapter and PersonCollectionDbAdapter is our Concrete Adapter.

Thus, by working through an adapter, our client could reuse the existing object that provides the needed functionality.

If you yourself are writing a library or a framework, and you want to ensure that it’s useable by future classes that may not even have been written yet, and so you cannot be certain what their interface will be, you can add support for an Adapter as part of your interface for your code, and this will make it easier for other future applications to use your code.

This idea is used within the. NET Framework Library itself, you will find if you look at ADO.NET in the System.Data namespace using a tool such as Reflector, that IDbDataAdapter has several derived types, including a concrete class called DbDataAdapter, also you’ll find the OdbcDataAdapter, OleDbDataAdapter, OracleDataAdapter, and SqlDataAdapter. Each of these implements at its core the IDbDataAdapter interface.

Where To Apply Adapter Pattern?

Entity Framework is an Object Relational Mapper (ORM) which is a type of tool that simplifies mapping between objects in your software to the tables and columns of a relational database. In this

C# 7.0 (.NET Framework 4.7) introduced ValueTuple, a structure which is a value type representation of the Tuple. It can be used where you want to have a data structure to hold an

Code with Shadman
—
Adapter Design Pattern In C#
Share this