C# is a type-safe language. Variables are declared as being of a particular type, and each variable is constrained to hold only values of its declared type.

Variables can hold either value types or reference types, or they can be pointers. This lesson covers the first two options; pointers are discussed in then next lesson.

Here’s a quick overview of the difference between value types and reference types.

A data type is a value type if it holds a data value within its own memory space. It means variables of these data types directly contain their values.

In the following lines of code, two variables are declared and set with integer values.

It is possible in C# to define your own value types by declaring enumerations or structs. These user-defined types are mostly treated in exactly the same way as C#’s predefined value types, although compilers are optimised for the latter.

The following table lists, and gives information about, the predefined value types. Because in C# all of the apparently fundamental value types are in fact built up from the (actually fundamental) object type, the list also indicates which System types in the .Net framework correspond to these pre-defined types.

Reference types actually hold the value of a memory address occupied by the object they reference. Consider the following piece of code, in which two variables are given a reference to the same object (for the sake of the example, this object is taken to contain the numeric property ‘myValue’).

This code illustrates how changing a property of an object using a particular reference to it is reflected in all other references to it. 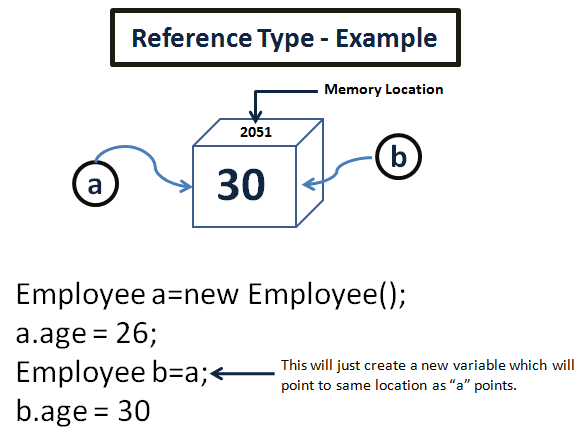 The pre-defined reference types are object and string, where object - is the ultimate base class of all other types.

However, that although strings are reference types, they work rather more like value types. When one string is set to the value of another, eg

Then s2 does at this point reference the same string object as s1. However, when the value of s1 is changed, for instance with

what happens is that a new string object is created for s1 to point to. Hence, following this piece of code, s1 equals “goodbye”, whereas s2 still equals “hello”.

The reason for this behaviour is that string objects are ‘immutable’. That is, the properties of these objects can’t themselves change. So in order to change what a string variable references, a new string object must be created.

You can learn more about c# strings here.

Boxing And Unboxing In C#

C# allows you convert any value type to a corresponding reference type, and to convert the resultant ‘boxed’ type back again. The following piece of code demonstrates boxing.

When the second line executes, an object is initiated as the value of ‘box’, and the value held by i is copied across to this object. It is interesting to note that the runtime type of box is returned as the boxed value type; the ‘is’ operator thus returns the type of box below as ‘int’.

If you execute an invalid unbox operation, the runtime will throw an InvalidCastException. You won’t see the error at compile time because the compiler trusts you in making the right call. At runtime, however, the conversion fails, and an exception is thrown.

The only other important thing to know is that when boxing and unboxing happen (as shown in the above example, unboxing is clear), you need to explicitly cast your object from a reference to a value type.

Boxing, on the other hand, is not that obvious. For example, calling GetType always boxes your value type because GetType is defined only on an object and can’t be overridden.

There are some performance implications with each box and unbox operation. When using the nongeneric collections to store a value type, you have a lot of those operations. The boxing and unboxing operations can hurt performance; however, now that you have generic support in the .NET Framework, this is less of an issue because you can store value types in a collection without boxing them.

In this article we run through a standard 'hello world' example, with links to articles covering the different parts of the program.